Before unified heavyweight world titleholder Andy Ruiz Jr. and former titlist Anthony Joshua fight in the ring in their much-anticipated rematch, there apparently will be a fight over where the bout will take place. 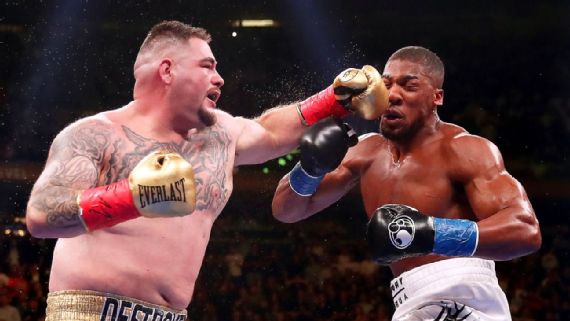 Ruiz was vocal about not wanting to have the rematch on Joshua’s turf in the United Kingdom when the likely site was going to be Principality Stadium in Cardiff, Wales. But when Matchroom Boxing promoter Eddie Hearn announced last Friday that the bout would take place on Dec. 14 in a soon-to-be-constructed outdoor stadium in Diriyah, Saudi Arabia, where the government is backing a site fee worth tens of millions of dollars, Ruiz also was not pleased.

He wants the fight to take place in the United States or Mexico, even though contractually he has no say on the matter.

“I know everyone is talking about the fight and all that,” Ruiz said on Tuesday in a live Instagram chat. “But we got the real news coming soon and the fight is gonna happen soon.”

In answering fan questions, Ruiz later said, “AJ got the rematch, yes we do got the rematch. But it’s gonna be on my terms. We’re gonna bring it back here in the United States.”

That notion would fly in the face of Hearn’s announcement on Friday and subsequent news conference in London on Monday when he appeared with Omar Khalil, the managing partner of Skill Challenge Entertainment, the company that spearheaded the Saudi Arabian effort to land the fight, and discussed a variety of aspects of the fight taking place in Saudi Arabia.